I had big plans for Connor and I today (after church, of course). We were going to hop on the bike trail not far from Kalamazoo (the “yes there really is a …” place) and ride into my office, grab some ice cream and play at the park before making the not-that-far trek back to our car.

We were full (from church and lunch) and dressed and started to load up the bikes. Or rather, I attempted to load up the bikes. I should have known before getting too far ahead of myself with plans that my road bike alone doesn’t fit all that well in my car so it was pretty durn likely that Connor’s bike wouldn’t just slide neatly on top of it. Fifteen minutes, a few new scratches by the trunk and a shirt full of bike oil and I gave up. I’m not gonna lie … tears were forming.

Just then, Connor said “it’s okay, mom.” He said that and I took a step back and realized that it was, in fact, okay. My rationale for trail-riding was for his safety more than anything. But I figured we could ride along the side of some of our local side roads pretty safely and hit the park a few miles away.

We were well on our way when Connor had just hit the dirt for the eleventy-billionth time and I said, “you have to make sure you’re paying attention.” Not twenty seconds later, he was on the ground. It really happened so suddenly that I can’t even say what he did. Regardless, his first words were, “i broke my leg. i broke it.” I scooped him up off the road and evaluated the situation. His leg definitely was NOT broken, but he did have a nice asphalt burn. Shoot.

He decided it would be best for us to turn and head back home. We had to stop for a break when we were about a mile into the ride back and it was … nice. We just sat for a few minutes and enjoyed the warmth and the horses grazing just down the road. We didn’t have anywhere else to be on a Sunday afternoon and I loved that. 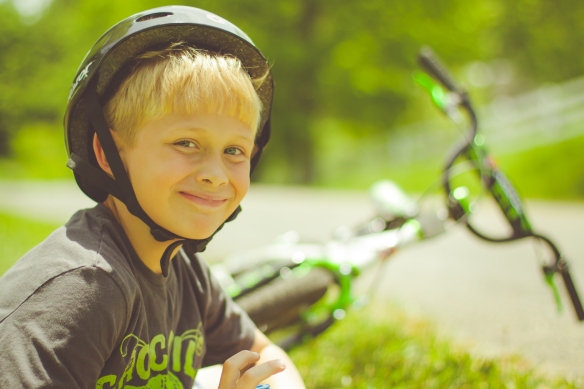 We were back quite a bit earlier than I’d anticipated and I wanted to keep playing outside while keeping his safety top of mind … so we hit the driving range.