Last year I took a road trip with my sister and her girls over to Ikea. Our primary goal was finding a bed for my youngest niece, but as anyone who has ever visited Ikea knows … you don’t leave with just.one.thing.

Imagine my excitement (and surprise) when Alyssa and I stumbled upon a suitable boyfriend. When I took him in my arms, I noticed his soft, smooth skin and oddly extreme flexibility. He was quiet, yet he spoke to me. I made up my mind right there he had to be mine. The best part was he was only $4.99. (Sorry to those of you who thought this was going in another direction).

I put stick guy on my nightstand the second we got home. I kept his arms in the form of a nice, big hug. Over time, though, I realized it just wasn’t working out so into my closet he went.

In a strange twist, I was scouring Pinterest one day for a bookshelf and came across an old door propped up against a wall with shelves where a piece of glass or wood would have been. And then? I saw him. He was standing on a shelf calling (Well, it looked like he was. I said he was quiet) to me. <whisper>If you build it, I will have a home.</whisper>

I found a really dingy old door at a resale store up in Grand Rapids. The middle was already cut out and it was screaming for a coat of paint. Surprisingly, poop brown only appeals to a few people. I would not be one of them. Thankfully, the two lovely gentleman who were using the store to support a local ministry were willing to negotiate so I left with the door and a small chair. I also truly believe where there’s a will there’s a way when it comes to fitting furniture of that size in a sedan. It actually feels safer when you’re unable to move.

Anyway, it took me quite a while to get to the door. Like … the whole summer. I decided to attack it late one weekend and the first thing I did was sand the heck out of it. A good amount of the (too) thick paint came off. My goal was to throw some new paint on without making it look like I was just adding to the layers. I loved the original hardware too, so I sanded some of the paint off and taped those areas to avoid adding any new. Who paints door hardware? And while I’m at it, who paints a door poop brown?!

I did want to add back in some of the aged appeal, so I did some additional sanding (distressing) after the paint was nice and smooth. I took the power sander to it again with a coarser (more coarse? who knows.) paper and hit a few of the edges. Once the door was dry and sealed, I added the shelves. I asked my dad to cut me up a couple of the barn boards we had left over from the great headboard project of 2012. I felt like the barn wood would be a nice touch for the shelves. My only lack in judgment here was about how sturdy the boards were so I did have to use some Gorilla Glue to help shore them up a bit. While I was at the Home Depot, I also bought some chain to help keep the shelves in place. I’d use some little L-shaped brackets in the front of each and the chain in the back. It was the most careful I will ever likely be with a hammer. Getting the barn wood to play nicely proved to be a challenge but I can tap-tap-tap-aroo with the best of them.

When I got the shelves in place, I brought her inside and found some random stuff I had laying around to place on the shelves. I really like how she turned out. Boyfriend is happy and I finished another pinspiration. On to the next …

i think he’s rubbing his belly and his head. people like to mess with him and like the stand-up guy that he is, he just takes it.

fun old books from my grandma’s collection and my pirate nose-picker. 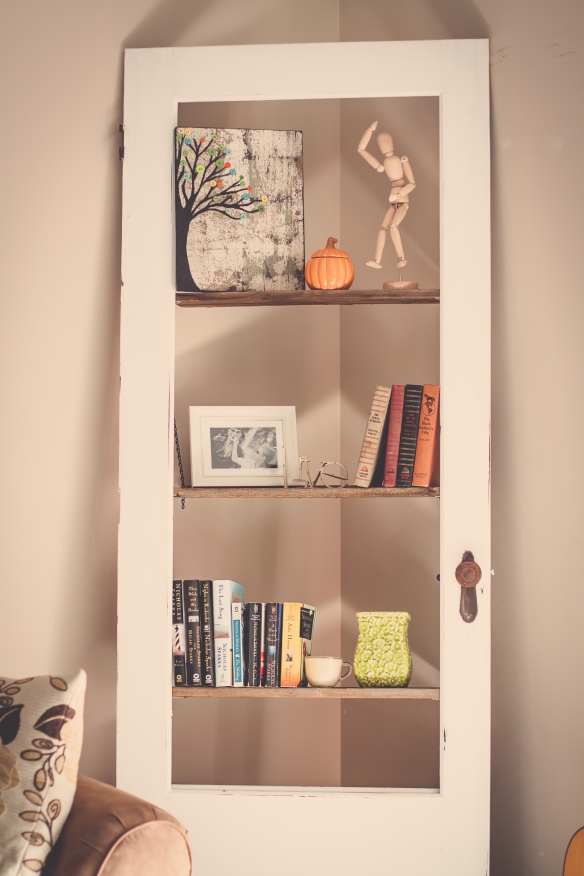 door to nowhere. p.s. i totally see that chain hanging out. perfectly imperfect.

1 thought on “the door to nowhere”