I was on a conference call earlier today and we were battling the typical audio interference … trains blaring, excavators tearing down buildings and, of course, sirens sounding. Wait. Sirens?

Just kidding. Sirens are common on a corner where vehicles frequently test fate and forget that pedestrians have the right of way. I had to push a car back once. I mean, I put my hand out and said, ‘Woman!’ Or something like that.

But buildings don’t typically come down. And I didn’t realize what was actually happening until well after the meeting. I was just making gestures to a girlfriend like, ‘hey, why is the sky falling?’ We were both confused.

When I did look outside, I noticed the old antiques store next door was in the process of being demolished. Which made me sad.

I recall the first time I visited. I was alone and frankly, was not feeling like it was a good idea for me to walk around in a cold, warehouse-like space with furniture from 1777 spanning wall-to-wall. Literally. But I’d heard they had some really neat items and great prices. I didn’t end up buying anything but I’d met the owner who was just a sweet, sweet man. It wouldn’t be long after and he would be taken suddenly, the victim of a homicide. Senseless.

Anyway, the store closed immediately following and never re-opened. I didn’t know (or didn’t think much) about what the plans were for the space but I had no idea it would be coming down.

The really thought provoking part though was the one side wall that remained in our line of sight from the third-floor window. There was a curtain covering a window and on multiple occasions, a couple of squirrels balancing along the line of cinder blocks holding the window in place. My friend even mentioned that I’d better be taking some photos. That’s where my head was as soon as I saw it. P.S. I miss taking photos every day but right now? Not feasible. Eek.

I got out of the office before the sun went all the way down so I could try to snap a couple photos before darkness fell over the place. I realized quickly there was no sidewalk and there was a fence guarding the entire area. I opted out of climbing it (it is a busy corner after all), so I tried to sneak my lens between and above slots whenever I could. Another friend left around the same time and was yelling at me from her car to not die. She’s so motherly.

I am not sure what they’ll do once all of the debris is removed. I heard that it may be additional parking for the brewery down the way. I guess it’s bittersweet.

There are pieces of the past that we want to hold onto. I saw that resolute curtain and imagined whomever must have put it there and what they were thinking at the time. I would imagine it was an original. It was just one accessory in the overall space, but it was the one remnant that was evident after the demolition began. Soon, it will be gone, too, but I wanted to capture a photo of it to remember. Emporium was a special place and a piece of Kalamazoo history. It’s sad.

But, if the space is being cleared to pave way for the future, I guess that’s good, right? I guess in this case it doesn’t make sense to leave a building standing but not to make use of it. At that point, it’s just a quiet reminder of what was. It doesn’t change what’s happened and it is likely a source of pain for some as they consider what could have been for a man with a passion for his antiques.

It’s good to hang on to some of the remnants for memory’s sake, but sometimes, you just have to knock down those old walls and create something new. 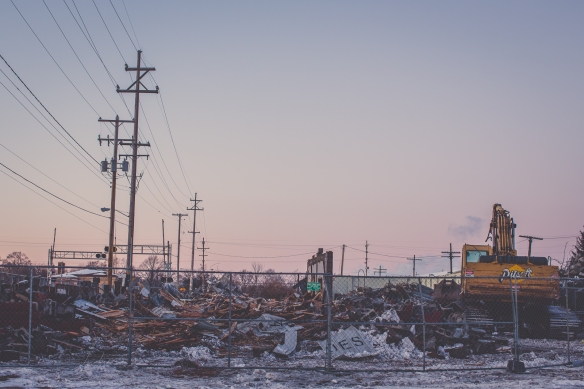