The good news is that it’s not quite winter so I’m not even late to share the last of our fall adventure. Right? #fullofexcuses

I forgot to mention in the last post that as we wrapped up our delicious lunch at Chick-fil-a that I spotted a Starbucks across the street and whispered to my companion, ‘Guess what makes my entire day right now?’ Connor asked what that might be as if another surprise was in store and I said, ‘Look there, across the street. Do you wanna go to Starbucks?’ (in song, of course). He had the audacity to say, ‘Mom, you drink too much.’ Espresso, that is.

The beauty of our CITYPass was that the venues we were planning to visit were literally within a half mile of each other on all sides so it made for a super easy trek between. We crossed the main street from the HoF with a man from Michigan. Connor couldn’t help but get into ‘sports talk’ mode and drilled the gentleman about his knowledge of NCAA basketball. I secretly relished the moment I realized CJ knew way more than he did. #proudandsnottymom

The entire reason for our visit was the aquarium but I think at the point that we’d arrived, Connor’s entire day was made because of his experience at the Hall of Fame. I seriously could not recommend that place anymore for a young football fan. But, still, he was over-the-moon excited about the prospect of seeing the whale sharks up close. We love Shedd in Chicago, so we knew going in this fish tank had a lot to live up to. 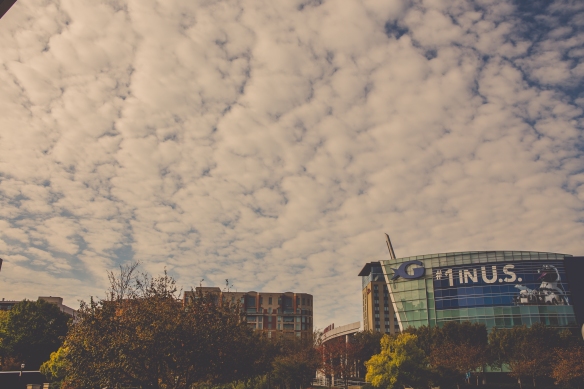 It didn’t disappoint. We started off with a sea lion show (no photos, please) and then headed over to check out the river critters. And seriously, moms, is there anything as sweet as river otters (Asian small-clawed versions, in this case)? I could watch them play for hours. But these dudes? Were sleepy. And photos of sleepy otters just aren’t as ‘awwww’-worthy. 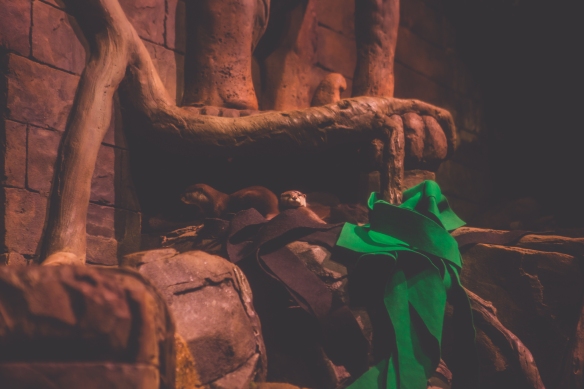 Thankfully, my favorite mammal of all time (second only to unicorns) was up next … dolphins. Connor knows dolphins are my favorite and he just looked at me with this sweet, ‘are you happy, mom?’ face when I saw them. Of course I smiled and reminded him that they were just the most beautiful, graceful creatures in all the … sea. 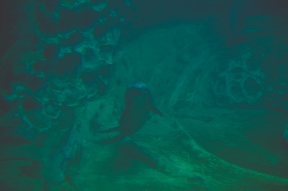 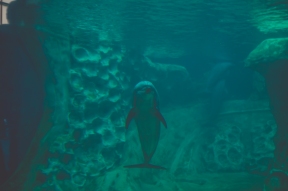 The dolphin show was outstanding. Again, no photos. Dear Shedd, thank you for allowing me to take photos your shows. Georgia loses in this regard. I can’t figure out what the secret is? Mammals jumping in the air. It’s every show. Anyway … we loved it. And our timing was impeccable to see the two shows we really wanted to hit. Little victories.

Next up was the Tropical Diver exhibit, aka the pretty, colorful fish that literally noone can get enough of (read: lines). 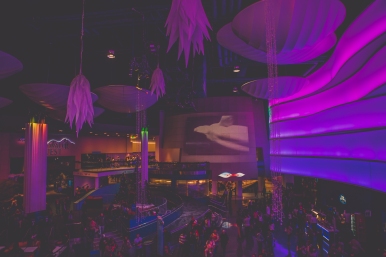 Connor was really struggling with rushing in to see the whale sharks or continuing along the logical map route. It was really quite precious because he was so excited, but decided to save the best for last. So, off to Cold Water Quest we went.

I don’t think either of us could have been prepared for the world that awaited us in Ocean Voyager. The path around showed snippets of a very large tank and in the distance (sort of Finding Nemo-ish) were these very (very) large shadows gliding through the water. It was when we entered the tunnel that we could see a fuller scope of those gentle giants. And they.were.incredible. Connor’s mouth didn’t close for a solid forty minutes. The final stop in the exhibit was a large room that we copped a squat in for quite some time. The time there was likely both of our favorites of the entire trip. The fish in the tank were amazing, but we helped a young lady get her phone back and also watched a young man reenact the entire ocean scene in a very unique interpretation. We believe he may have been more than just high on life, but it was seriously outstanding. Connor and I had a good chuckle and let the young man know he really did his part to enhance our experience. Connor does a phenomenal job of acting the part of that young man if y’all are interested.

We ended our visit at the aquarium and stepped outside into a city illuminated with colorful lights and temperatures comfortable enough to walk back to our hotel. We decided we would try Hard Rock that night and although we could have gotten a table fairly easily, we grabbed our food at the bar and trekked back for a second night of carpet picnic-ing. But not before I adequately embarrassed CJ with my dance moves as some of the other customers got up out of their seats and participated with the staff. 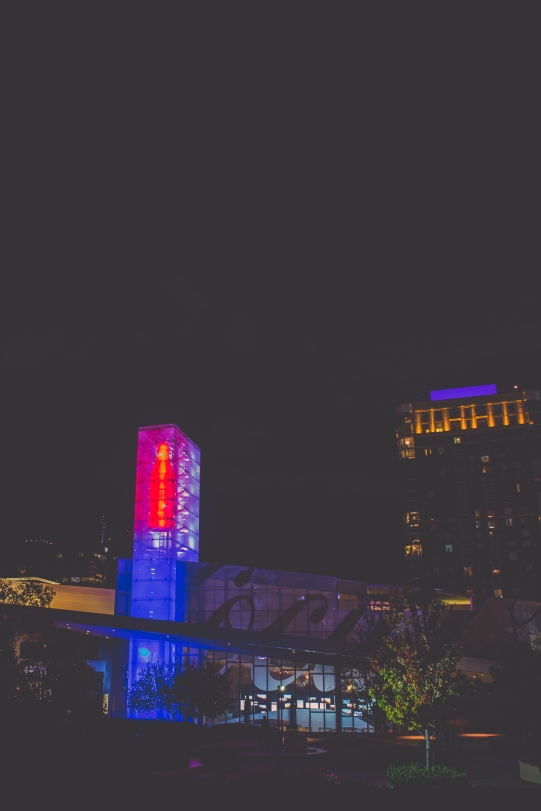 We had to wake fairly early Sunday morning in order to catch our flight back to G-Rap. Our first hiccup was some concern over the train not being on time to get us to the airport. I stayed patient while I didn’t know the status and then, as if God said, ‘I gotchoo’ the train arrived on time.

The second was in security. You know how we were so excited about all the freebies at the World of Coca-Cola? Well, we still were and there was no way in all of heck that we were going to forego bringing back our souvenir glass bottles (again, free). We walked through the line and before we arrived to the guards, I told CJ that I was nervous we would have to trash them. I politely asked the two lovely ladies what my options were. They said they have no idea why the World of Coca-Cola gives guests 8 oz. bottles of Coke to take home with them when you can’t fly with more than 3 oz. PEOPLE. So, she hollered out to see if anyone had a bottle opener. I didn’t anticipate anyone would admit they were basically carrying a WEAPON but then, a man a few rows to our right handed his forward, the lovely guards popped the tops and CJ guzzled his Coke. I drank a sip (this was a small victory for me) and dumped the rest. It was a beautiful story of everyone winning, really. I mean, everyone in line got to hear the ‘hisssss’ of a Coke opening and then suddenly everyone busted out in a rendition of, ‘I’d like to teach the world to sing …’ Well, it felt like that anyway.

Once they finalized the full-body search, we were on our way home. Connor constructed an amazing version of our plane on Minecraft and I played with photos. I never regret bringing my camera. I rarely print photos (I’m the worst mom!), but I love looking at them; they allow me to be with CJ all the time. These moments? They are priceless. And I’m so thankful that we had the opportunity for a whirlwind trip. When Connor said that Saturday ‘may have been the best day of his life,’ well, that made it 100% worth all of everything. 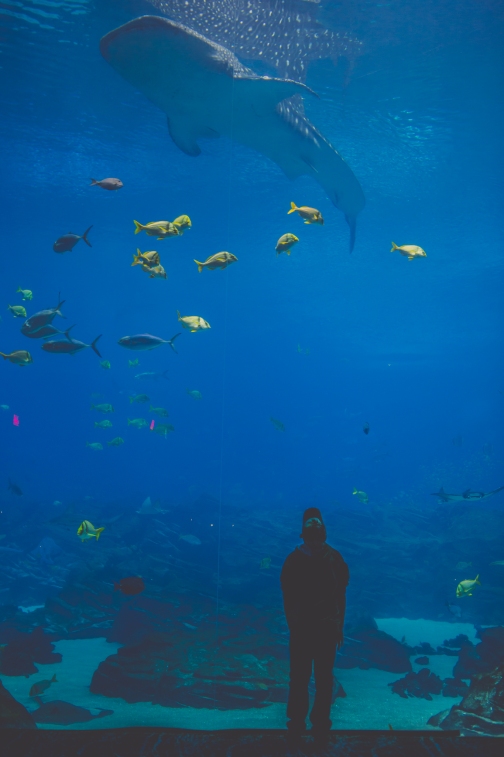 jam-packed weekend of fun with my favorite. #vscocam #atladventurewithcj

1 thought on “fall #adventureswithcj (the end)”