Did you know that if you live what’s considered an “average” lifetime, you will breathe for roughly 36,816,480 minutes? I didn’t either until just now. Thanks, Google.

I’ve had several moments in my (shorter in comparison) life thus far. I was fortunate enough to have another one this past weekend. I celebrated with my cousin, Tiffany, as she married her best friend, Andrew. The moment came just before Tiffany walked down the aisle. She stood arm in arm with her brother, Nick, who would walk with her and ultimately, bear the responsibility of giving her away. 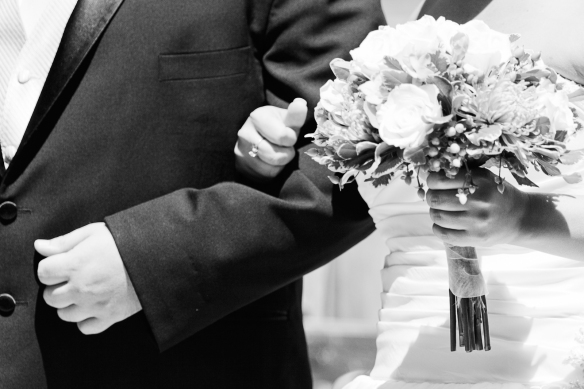 My inability to capture what happened next was a result of another moment in the past … watching them become inseparable while their dad was fighting cancer. Nick proudly escorted Tiffany and the tears flowed freely from my eyes; camera shaking along with my emotion.

I guess “capturing” in this moment was two-fold. I was attempting to capture Tiffany and Andrew’s wedding with my camera (and so was my amazing sister), but I was able to capture the emotion that everyone in the chapel felt … for them, and with them.

At the end, I hugged Nick tightly as he walked back and told him I was proud of him. I heard my mom say, “You were born to do this.” Her words could not have been more true. Uncle Steve would be so proud.

Life is not measured by the number of breaths we take, but by the moments that take our breath away. – Hilary Cooper