(n) 1. steady persistence in a course of action, a purpose, a state, etc.,
especially in spite of difficulties,obstacles, or discouragement.
2. Connor

This kid, he amazes me. Connor and I were blessed with a long weekend (yes, a planned day off from school is far preferred to an unexpected snow day) and I had some fun activities planned for Saturday and Sunday but was leaving Friday open for errands.

When Connor got up Friday, he declared that today was the.day. that he would start (and finish) building his Malevolence LEGO ship he got for his birthday. We’d been waiting for a good, long stretch to work on it because it includes just under 1,100 pieces. I told him that he could definitely get started on it and then we were going to run up to Grandville to take care of some mom things. He got to work and calculated just how many pages he would have to get through. That would be 134.

He got through page 20 and I told him it was time to get our move on. I remembered (quickly) how little kids like errands. He was asking in the car how many places we had to stop. <warning>Parents everywhere: This.is.a.trap Be vague. Don’t give a direct answer.</warning> I told him that I wasn’t sure, but it would include Hobby Lobby, Lowe’s and the meat locker. What? These aren’t your normal errand-type stops?

We got through our errands in about three hours (mind you, the drive was a little over an hour and a half of it) and he immediately got back to the ship. At one point he said, “Um, a little help here?” I was quick to jump in because I could tell throughout that he did not want my help. He really wanted to tackle it himself. He did stop to ask me a couple times if I thought there was any way he could finish it and I told him that if he put his head down and focused on it that very likely, yes, he could. 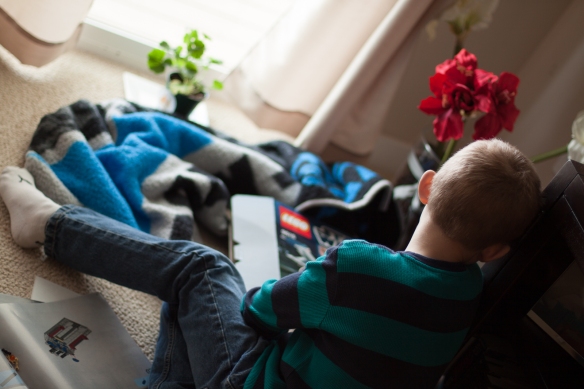 So, at about 8:20, he asked for help one last time to get the ship’s top in place and voila!, the Malevolence was flight-ready.

Can I take one moment to ask the LEGO company to STOP including ‘extra’ pieces? I have mini panic attacks (and I’m not the only one; a girlfriend at work and I chatted about this today) when I see those 4 extra pieces per bag just laying there taunting us as if to say, ‘Oops, you missed a step.’ Not a fan.

Of course, CJ was uber-impressed with his LEGO-prowess and declared himself smarter than any nine-year-old that ever lived because surely not one of them could’ve built the same ship in 6.5 hours like he did. Oh yes, I missed noting that the set was designed for 9-14 year old LEGO maniacs.

Then, Saturday, after his last basketball practice, I took him to an indoor rock climbing place just south of Grand Rapids. I’d found a deal for a couple day passes and I thought it sounded like something he would really like. We had climbed last summer an an outside wall at Ropes Course, Inc., but this was his first time inside.

We were equipped with our harnesses and I was taught how to belay. Tip for future visits: Belayers (I have no idea if that’s what they’re actually called) should wear gloves. The burn on my thumb is a reminder. Connor made his way up the first climb. The staffer was pretty impressed and just commented, “He has no fear.” He certainly does not.

That was the first of three routes he would finish (multiple times). He even found on a subsequent trip up that particular wall had an easy button. He said, “Mom, there’s a button up here. Should I push it?” Immediately, my response was, “No, it could be a fire alarm!” Wait, why would the fire alarm be up that high? He said, “Well, it says something. E-a- .. easy.” I chuckled. “Yes, you may push it.” He then pressed it multiple times to hear, “That was easy.”

Connor climbed for two straight hours. The last couple of times he went up I could tell he was wearing down. A couple times he would hang back from the wall to take a break. I reminded him that meant I was holding him up. “Oh, sorry Mom.” I asked him if he wanted to come down and he just responded each time with, “No, I’m not gonna quit.”