I swear on all that is holy we’ll be done talking about two-month old vacations before 2016. But really, when you enjoy something so much, why stop talking about it? Like ever, you know?

Last I left you, we’d wrapped up our first day in Oregon. We woke up to the most magnificent view of Mt. Adams and upon getting ready were served up with a lovely breakfast of fresh fruit, bacon and eggs. #ftw Jess and Tyler were literally the nicest, most laid-back people on the planet. They shared their story with us a bit more over breakfast and I truly appreciated how sweet they were to CJ.

We knew we had a big day ahead of us (there are going to be two parts to day 2, FYI) so we set out fairly early after our healthy breakfast and goodbyes. Thankfully, Jess advised we take the scenic route because. Scenic route. So up my alley. We weren’t on the road more than twenty minutes when Connor jumped out of the car to snag a pic. 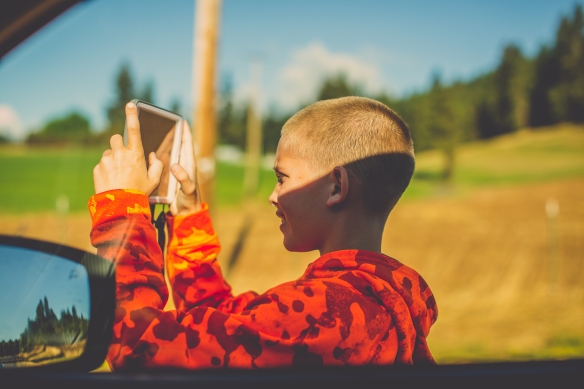 Ok, fine. I did stop and got out first but he definitely hurried. Because, Mt. Hood. 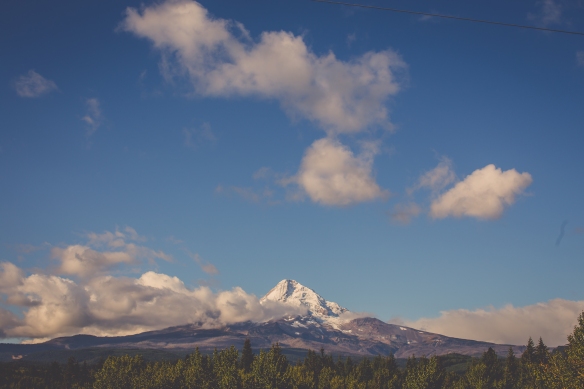 How lucky were we to have such a beautiful blue sky? As we continued to drive towards the mountain, it just felt like it grew even larger. I seriously am in love with mountains. And yes, I love them so much I could marry them. 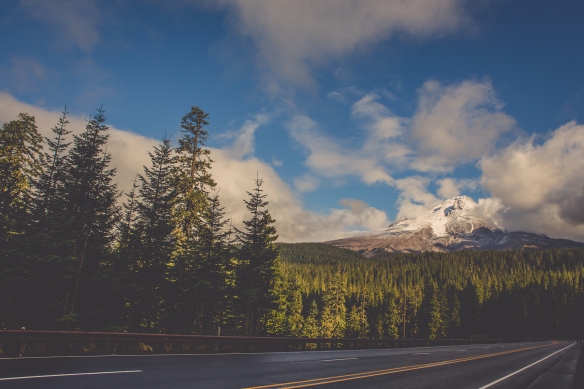 We got back in the car and continued on highway 35 and came across a bridge that stretched over what was called White River … except, there was no river. It was almost completely dry. So, we pulled in to check out the scene. All CJ could think about was jumping out (again) and walking around in the very frigid water that remained. It was so.cool. I mean, the space was cool. The water was frigid. No lie.

It wasn’t long after our stop that we came to a sign that pointed towards Mt. Hood. It wasn’t on the path but I could tell it wouldn’t take us all that far out of the way and hello … scenic route?! So, we started driving. Not surprisingly, we were heading north-ish and then also in a not so surprising fashion, it started getting cooler. But then, it got so cold that I had to turn the heat up higher. And then … we saw snow and I was like, ‘that’s it, we’re turning this rig around!’ I’m kidding. Like the rebels that we are, we did drive to the top of that there road and ran into a historic inn that was the setting for the old horror flick, ‘The Shining’. In a not so surprising move, Connor wouldn’t get out of the car. But he did get out just long enough on the route up to hold up the mountain for just a quick minute. 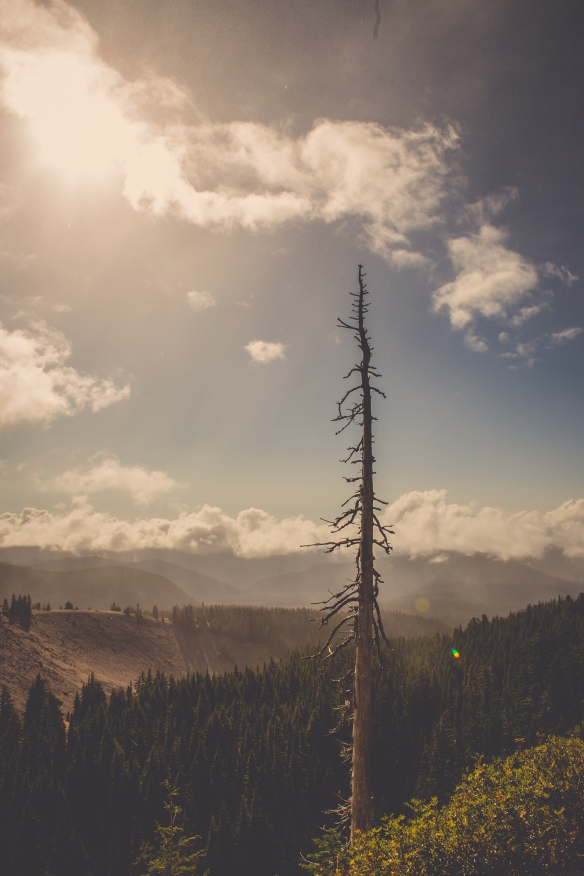 It was another one of those detours I’m thankful we took. And I can seriously deal with the snow if it’s going to be short-lived.

We got back onto our planned route and sure enough, I found another sweet detour that would guide us through the Willamette National Forest ending up in Detroit. Because, why not? At one point, I was praying and I said, ‘Lord, this boy and I are anxious to see some wildlife. It would sure be nice if you could show us an animal here or there.’ And wouldn’t you know it, 10.5 seconds later a deer jutted out towards the Subi. I laughed so hard and told Connor that surely God does answer prayers and to keep his eyes.peeled. Shortly thereafter, Connor fell asleep. Once we got into the thicker forest-y part, it was slow going and oh so beautiful. I cranked up some Jesus tunes and stopped a couple times to just appreciate what I was surrounded by. I mean, when we started on that road, it was definitely a two-lane. There were lines and everything. And then, at one point, the lines just stopped and I was praying for Jesus to take the wheel. 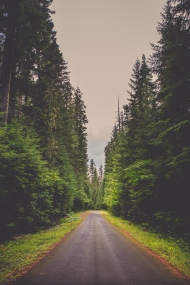 I haven’t had that much fun driving in a long time. It reminded me of a mission trip to Jamaica just a few years back. We were on a giant bus and would approach curves on these mountains and just as we’d get close to the turn, the driver would honk as if that single action would alert an oncoming vehicle to our presence. I wasn’t that nervous here, but I won’t lie … a couple times I wondered if this was still a road that I was supposed to be driving on. But, I’m sure it was. I mean, it’s on the map. Right?

We arrived in Detroit and stopped for lunch, which consisted of ice cream. Hey, it was gluten free. I assure you, this was the cutest little Detroit I’ve ever seen. Detroit Avenue was the main drag and then you have the lodge and the grocery and well, that was pretty much it. It actually reminded me more of Hopkins. Maybe that’s why I appreciated it’s charm so much.

Our next long stretch would eventually get us to Eugene, but first we stumbled upon a park that mentioned waterfalls. I know they say not to chase waterfalls but seriously, if I have a chance to see them you know I’m going to take it. It was still fairly cool, but it was absolutely perfect weather to get out and take a few minutes to stretch our legs. As a grown-up human being, I could have been okay with a bit longer of a hike, but given my nine-year-old co-pilot, we only got into the trail about a 1/4 mile before we were simply too.tired.to.carry.onnnnnnn. But, it was enough and I was grateful. 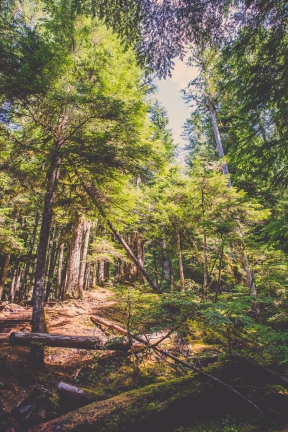 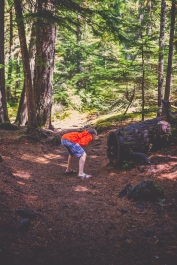 We got back in the car and after reassuring Connor we would absolutely get to the UofO campus that day, it wasn’t too much longer before we need to stop for gas. I got out and walked over to the old school pump and a young lady stopped me. I was all, ‘ummm, I gotta get some gas.’ She walked over and said, ‘ma’am, I get your gas.’ Wait. What? Apparently, we’re not in Kansas anymore. And holy man is it nice to have someone pump your gas?! Come on, Michigan. Let’s work on this. #morejobs

After our 5-ish hour tour, we arrived in Eugene. Connor had been waiting for this moment for what I’m sure he thought was his whole life. Our first stop was Autzen Stadium, home of the Oregon Ducks. We parked in what I’m sure was okay parking for visitors and headed up to the Hall of Fame. I couldn’t have dreamed it would go any better. There were championship rings and trophies and a Heisman and a museum (!) and a store and of course, the field. You know what’s lame? That they won’t let you in. The gates (automatic, mind you) did open just long enough for us to totally sneak in but Connor would have no part of it. He’s such a rule-follower! Ugh. 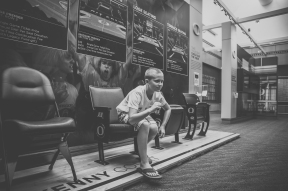 He was so geeked and it made my heart feel so full to experience that with him. After our trip to the stadium, we headed over the well known Hayward field, the place my work friend called ‘the mecca of track and field.’ It lives up to the hype. 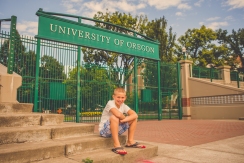 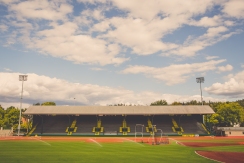 We toured the campus as if we were about to start freshman classes, grabbed a root beer float (that would be ice cream stop number two for the day if you’re keeping track) and headed back for our trek out towards the coast.

And apologies, but I took a few photos once we reached the Pacific. I mean, it was Connor’s first time and well, it photographs well? So, look for part 3 soon.