It only stands to reason that my first March post includes the word madness because basketball and because, well, madness.

But back to basketball. I can’t talk about a tournament that rhymes with NCdoubleshmAA because we’re mad about it. So, I’ll jump even further back to January and February because that’s when the legit madness was ensuing. The good kind, that is.

If you’ve spoken with Connor for ten seconds, you know that he has mad love for both football and basketball. It just depends on the season. So, right now? It’s basketball. We started the annual camp at school the first weekend in January. There are a few drill-style practices, the choosing of teams and then games. Those games, though!

It’s no secret that I might be one of ‘those’ parents. You know, the one who gets a bit too excited when their child scores a point/makes a goal/ and who jumps up ready to race to the court/field/pool if there’s any inkling an injury may have occurred. Thankfully, I only had to stop myself once in basketball. And while it was embarrassing, those are the moments I literally do not care what others are thinking because, hey, mama bears protect their young!

There were two things about basketball this year that thrilled me to no end, though. One, I absolutely love the involvement of the varsity team. I remember how much I looked up to the older athletes as a youngster. They were basically celebrities and I would have done whatever they said (within reason). And I don’t think kids have changed all that much. It’s just a treat to see those young men coaching, mentoring and goofing around with our kids. I hope they realize the lives they’re impacting and that they are grateful for the time spent.

Two, my kid. His dad’s always called him a thoroughbred and while I can assure you he’s not a horse, he’s definitely talented. And it was so fun to watch. I told him after his first game he has more confidence at his age than I’ll likely ever have. Watching him skillfully handle the ball, drive towards the hoop and play his little heart out made me beam with pride. Or wonder. Maybe it was wonder like, ‘hmm, that’s so freaking cool! when did he become such a little player?’ (Basketball player. If he were any other kind of player, he and I would be talking very seriously.)

His team finished the season at 4-0, which was awesome. But I honestly don’t care about that. What I care deeply about is seeing my son live out his loves; dreaming about what his future might hold (‘mom, even if i sit on the bench, i want to play in college.’); and growing into an amazing young man that might even help out with a camp for some little wannabe sixth grader some day. For now, he’s the wannabe and I’ll be that one on the bleachers you wish would just shut up. 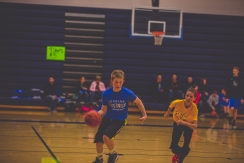 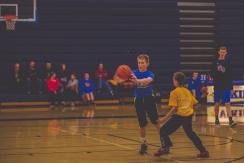