I wish I would have done a better job of documenting these past few months with Connor because holy man, I’m riding a wave of emotion right now about the amazing gift of a child I’ve been given.

It’s kind of unbelievable to look back over the course of three months and think of all that’s happened and all that’s changed. When I consider that Connor wrapped up an amazing second grade year on June 30, er, June 10 (sorry, it was a long Michigan winter) and now we’re already two weeks into third grade, it’s just tough to wrap my head around it all.

So, here’s a short list of the fun stuff Connor got to do this summer:

I added that last one because I still think it’s fun.

So, Connor did have so much fun and I’m so happy I got to experience many of those fun things with him, but more than all of it, he just … grew up. He’s still eight, just like he was three months ago, but he’s a different eight now. He’s definitely closer to nine. He’s definitely developing this heart that I’m so very proud of. I first felt it when I returned from Guatemala in late June. I won’t ever forget the emotion behind that hug he gave me when we first saw each other. “I missed you so much, mom,” he whispered as he wrapped his arms full-on around my waist.

Then, I felt it again when he saw me after I’d gotten in my accident. I can’t even explain how thankful I am that he wasn’t with me that night. As much as it hurts every moment we have to be apart, there are times when I know that God’s hand is at work in all of this and that night was one of those nights. When he saw me the next day he said he was just glad I was okay. And when I asked him what kind of car I should get, he said, “mom, I just want you to get a car that’s safe.” Either he expects I’ll get in another accident or he just really does want his mom to be safe. I’ll go with the latter so I feel like less of a target. It would also be the reason I bought the exact same model car I got my clock cleaned in. I’m a safety girl. (50 gold stars to anyone that can name that movie)

There are also these little moments that I don’t know if he even realizes that I sense this transition from the childhood selfishness we all have to someone who considers the needs of others. It’s one of the most beautiful things to watch; like when his prayers aren’t totally about ‘hoping we have a fun day tomorrow’, but about ‘please just be with the Logenstein’s (Lodenstein’s),’ or ‘please just be with that baby,’ or ‘please help my mom not to be in any pain.’ And it’s also evident when he offers someone a seat or when he gives his cousin his ‘blue clappers’ because he sees she doesn’t have any. I tell him how proud I am of him and he just shrugs it off. Humble, (at times) that one.

He is also quicker to hug. For instance, he started giving one of my best friends bear hugs instead of hitting her on the head like he did that one time when he was six. He may not realize it but I couldn’t be much more gosh darn proud to see him hugging instead of hitting. I just want to give him an ‘atta boy and tell him that’s the stuff that will surely win the ladies over. Flash the grin, give a hug. So easy.

We also have those awkward moments that result in the ‘oh, mom’ eye roll or me totally embarrassing him. I honestly have been excited for this phase to start because his face just looks so cute when he’s uncomfortable. We were in the car one time and I asked him how his tummy had been feeling. “Mom, it’s good, but I call it my stomach now.” Oh dear.

Or, there was the time we were looking for underwear while back-to-school shopping and I very sincerely said, “Ooh look at the superhero ones! They even have Despicable Me 2.” He tilted his head and said, “Mom, I’m growing up. I don’t wear those anymore.” I acted like I was crying and told him he’d broken my ever-loving heart. Who can I buy superhero underwear for now?!

As much as I don’t wish for my little boy to become a little man, I can’t help but be overwhelmed with pride at the little man he is becoming. He’s been through a lot in his eight years and I’m not going to pretend he’s perfect, but he is pretty darn special. And I couldn’t feel more fortunate to be this third-grader’s mom. 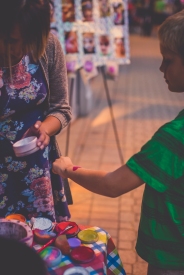 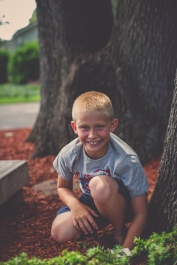