I have an affinity for the word ‘redux’. Quite simply, it means revisited; however, it also is synonymous with restored. There are no two words more adequate to describe my second adventure to Guatemala. Revisited? Yes. Restored? Oh goodness. If restoration existed in a bottle and it was known as agua pura, then without a doubt I would know it came from the place that has officially taken residence in my heart. I feel badly though, because to go to Guatemala doesn’t necessarily translate into being able to effectively share Guatemala. And just as with my trip in 2014, it takes almost literally forever to figure out how to convey. But as I ran through photos with my parents this weekend and felt the name dementia kicking in, I want to get into it before I forget I even went. I mean, I wouldn’t. But, you get me.

Oh, but first before I dive into the details of the trip, I want to thank the people who gave from their hearts to support Mike and I on this adventure. This trip was different than any other I’d been on in terms of fundraising, but just as with every other (praise!), God provided. And we are supremely grateful. It’s like we got to take you along, except you didn’t get stuck in Miami and you still got to flush your paper down the toilet. #tradeoffs

This will still likely take a week or two to unpack. I want to tell you ev.er.y.thing. And you don’t have to read all my silly words because guess what? Pictures! I have close to 500. And I will never ever ever regret toting my camera around. She’s one of my babies and although she gets heavy, I wouldn’t leave home without her.

So today is all about days 0, 1 and 2. Yes, there is a day 0 but only because it becomes important to the story. You’ll see.

Thankfully, the day before we left was during week 1 of my sabbatical so I had the luxury of avoiding the hurry that typically comes with packing for a trip. Like you know, an hour before departing for the airport. I ironed and rolled and packed my very favorite 22 (!) year old missions bag. She is sadly starting to fall apart but she is also extremely easy to spot in a sea of black suitcases at baggage claim 7.

I ran some errands and was feeling pretty amazing. I was packed, had plenty of time, got to see my boy later before I left and man, life.was.good.

And then there was a series of silly little things that sent me into a bit of a downward spiral. And when I got to Mike’s, I curled up into a ball and cried like a baby that I wasn’t ready or even equipped to go on this trip. And as he always very kindly does, he told me to knock it off. As he packed. Last minute.

Our trip officially began when Scott and Dana (two of our mission team members and friends from Mike’s church) arrived an hour early at 12:30 on a Saturday morning. They were all ‘oops. we’re early!’ and I was all ‘but … nap.’ And as soon as we got chatting and laughing, my nerves started to subside. Soon enough, the rest of the crew arrived and we were on the road right around our 1:30 a.m. planned start en route to Chicago. Our flight was due to leave at 6:00 a.m. out of O’Hare. When flight arrangements are confirmed, it’s not as scary to see the 6:00 a.m. start. Later, when you have to really consider the logistics, you start to feel like a real jerk for forcing everyone to stay up through the night. #sorryfriends

The first leg of our trip went really well save for one wrong turn at the airport … which can actually turn into a 15-minute game of ‘how to get to the beginning of the airport.’ We arrived in Miami only a few minutes late as we were delayed getting off the ground in Chicago. Thankfully (or so we thought), our flight was delayed there as well so nbd. Right? Mike and I decided to grab lunch and I assured him this is how the mission trips go. You get behind and you lose people. It’s totally normal.

When we got back, our flight was delayed again, but this time for another hour. I looked at this as an opportunity to get a Starbucks. Everyone wins! But then as I was walking, I got a text that our flight was canceled. Whaaaa?

Ok, here’s the part where I go into what I like to call ‘channeling Sally mode.’ I’d honestly been asking myself what my role was on this trip. I was kind of the outsider in terms of the group and I didn’t want to just jump in and take over but I’d made the travel reservations and there was no way I was letting these people down. So I ran back and said, ‘hey guys, flight’s canceled. i’m going to call now and get us re-booked.’ I hop on the phone and at the same time, they made an announcement to go to a counter a couple gates down. I may have shoved a few people as we all ran over to be first in line, but I was sure to say ‘God Bless You!’ That counts, right?

Ultimately, I was able to re-book over the phone but unfortunately, the only option for the 12 of us traveling down was to stay over night and fly out on Sunday; first to Dallas and then to Guatemala. Not as awesome.

American was nice enough to hook me up with their vacation travel group and we found a room not far away so we would at least have comfortable beds for the night because you know … we hadn’t slept since Friday night. We talked about leaving our checked bags at the airport to avoid toting them back and forth but Staci pushed back because Staci doesn’t plan to stay overnight due to volcanic eruptions.

Yes, it was an eruption that canceled our flight. The commonly active Volcán de Fuego opted to erupt leaving travelers stranded in several locations that day. We weren’t alone. But, as you might imagine, emotions were running in the zone closer to red … light pink maybe? We were tired, kinda stinky and not sure if Sunday would actually find us in Guatemala.

But, blessings. Because we were stuck in Miami, we were surrounded by palm trees and sunshine. At this time of year, it was certainly preferable to say … O’Hare. Once we got settled at the hotel, we had a quick team meeting around the pool. Apparently, Mike and I missed a meeting where everyone agreed to share a little about how they’d met and how God has been integral to their relationship with their spouse. Right. They were all married. We are not. #awkward

We talked, too, about the reality of being delayed. And I had it on my heart to ask a hard question. And it might have been for me. I said, ‘are we ready?’ Because maybe, just maybe, God gave Fuego a memo that Staci wasn’t ready to get to Guatemala and that a little help in delaying travel may be necessary. Well played, Lord. Well played.

It was my day 0 that had made me question. And now on day 1, I was recognizing that I needed the break, the delay. I needed the sleep. I was in bed that night by 8 and didn’t open my eyes until 6 a.m. the next morning.

Our early wake-up wasn’t terribly surprising. I mean, most of my fellow travelers are adults and wake up early by default anyhow. I’m still working on that. I think everyone was excited for the hotel’s continental breakfast so when we all gathered in the lobby to eat, it was kind of a bummer to find out they don’t actually have one. I blame Josh. JK Josh, love you bunches.

I called American to see if there was any opportunity to get on an earlier flight and as anticipated, there wasn’t. However, flights were leaving on time and I was hopeful that today was our day. Besides, I talked to Mike and said it was entirely possible we could be delayed further and quite honestly, if that meant a couple days in Dallas, I don’t think Mike was game. So, I had a talk with the Lord and said, ‘ok, i heard you. i’m ready. please don’t let mike back out!’

The later flight that day meant we could have ‘church’ in an old hot tub room by the pool. We had a really great time talking about the state of our hearts and agreed that we needed this time as a group and to rest before we left. At that point, I had absolutely zero doubt that we would end the day in Guatemala.

So when the pilot said there was a system monitor thingy they were looking at after we’d gotten on our first plane, I breathed deeply and remembered what I knew. The only bummer about this first flight is that most of our group was scattered and I could only see the back of some hot guy’s head in seat 17B. And he had some lovely Aussie woman sitting next to him that wouldn’t trade seats. She obviously knew what I did but c’mon!! It worked out though because I had the chance to power through half of ‘Daring Greatly’. Go get it. Read it. Report back.

All systems were a go in Dallas. Mike and I had seats next to each other and I asked him like I do, ‘are you excited??’ and he just looked and me and gave me the ‘you know excitement for me looks like a straight face’ look. So stoic. Near the end of the flight, I started playing finger games with the little Guatemalan boy in front of me. His face was so precious and he giggled as we played and my heart softened so much. I remembered why we are doing this and what the point of missions is. Just love. Just be some Jesus.

Our arrival in Guatemala meant customs and paperwork and it was only mildly painful but they let us all in. Yay! Our group would skinny to ten after this stop, though. We’d taken a couple back from their home in the states to their home home in Guatemala. Jose Felipe and Francisca had the most precious reunion with their family there. I can’t imagine how I would ever deal with having people I loved in different countries and having to choose where my heart would call home. But for them, it’s Guatemala and we were thankful we could help them return.

Dale Beyer from Hope for Home (the ministry we were geared up to work with for the week) met us at the airport with his daughter Kathlyn. He immediately reminded me of my former fave Pastor Jack. Fast friends, indeed. The drive to our hotel looked so familiar. It was a bummer because it was dark and I so desperately wanted the team who hadn’t been to see what Guatemala looked like but we’d have a week and surely, more opportunities to ride in the big hoopty van.

We arrived at our hotel in San Antonio Aguas Calientes (translation: Saint Anthony’s in Hot Water) with enough time to figure out where everyone was sleeping and get ready to crash for the night.

Gosh, I bet you thought you’d hear more about Guatemala. We’ll get there. I promise.

For now, here’s how day 3 started. 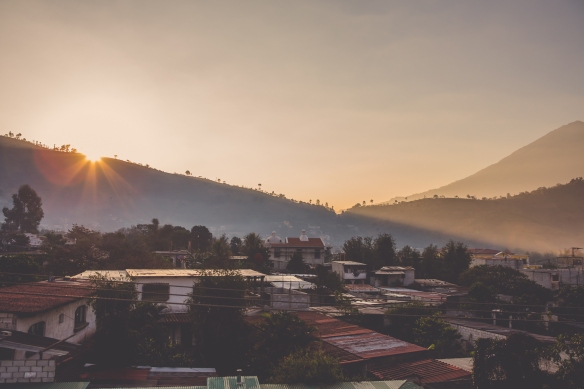