I was feeling all sorts of bummed out Saturday night when my own mother was rubbing her ‘moon pics’ in my face. Here in Michigan, the moon was shrouded in a sea of milky clouds. As much as I willed them to move aside, they just wouldn’t. And apparently in Florida where the Christmas season means you might get down to a chilly 50 degrees at night, the moon shone in all her splendor. The good news is that Sunday morning that moon was ridiculous bright. At 5:50. That’s a.m. I mean, I did thank the Lord for hearing my prayer and answering it so I could see that sucker but then I asked him why He is so humorous as to wake me up on one of my two days to sleep in. He hasn’t answered yet.

My gratitude led me out on the porch to take some photos. Because I was up and I knew I needed to get gas anyway, I decided to take off to see if I could get closer as it set for the day. Guess what happened as I hit the road? Crazy fog. Like, crazy.

So, alas, my fun moon chasing was cut short. However, I came back through past my favorite tree. 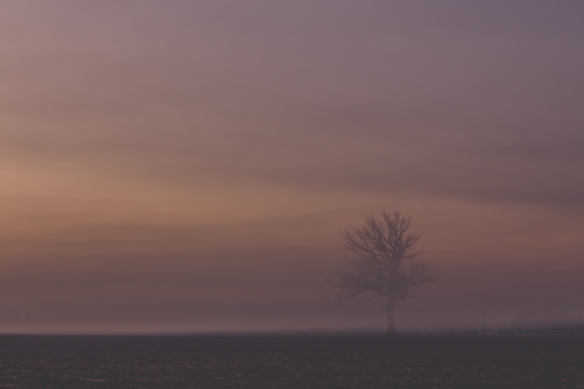 This tree and I go way back. I used to drive by her (yep, definitely a woman) daily on my way to and from work. A friend (who traversed the same route) and I would often chat about just how impactful this tree is. But why? It took me until now to put some real meat to why she often makes me stop in awe.

There’s a verse in Scripture that hit me over the head this year as we talked about being battle ready.

Therefore put on the full armor of God, so that when the day of evil comes, you may be able to stand your ground, and after you have done everything, to stand. – Ephesians 6:13

I couldn’t tell you with remote accuracy how old this tree is. But if I had to guess, I’d say it’s … old. But, just like every other tree in the not-so-distant more wooded areas, she started small. A seed, in fact. And it’s likely that some wise (because he was probably old, too) farmer planted her right.there. so his sons (and daughters!) could have shade while they worked the fields. Or maybe their cows? But I like the story of shade for humans better.

She grew and she grew. She grew until she was as big as she is now and unfortunately, over time, she looks like she might have taken a few licks. Given she’s in the midst of a wide open field in what can be West Michigan’s snow and wind belt, it’s no surprise.

Her branches are clearly misshapen. The side facing west clearly having taken the brunt of the ‘weather’ over time. She droops a little on the left there and obviously, in preparation for the change in season lost whatever leaves would hide some of those residual scars.

But sure as I was sitting there in my car at just before sunrise on a Sunday morning, she stands. I sincerely wish I knew more of her story. I wish I could thank the very old farmer who planted her there. Because he gave her a chance to live. Despite knowing what difficulty might lie ahead and the damage she was sure to endure as a result, he knew full well that she would grow into maturity, having grown up from a tiny seed into a beautiful, though slightly scarred, tree with a purpose. It was just to share.

So, she stands. And though the original intent for her to provide shade to one or two over time may have shifted, she’s got an even greater purpose today. She is proof, to me, that no matter what this world may attempt to throw at us, that we have the opportunity to stand. Even after everything. And frankly, I don’t think I would have noticed her had she not so proudly displayed her scars.

I hope you’ll proudly display yours, too. Because it’s when there is an opportunity to relate or even just to meet from a place of empathy, that we can truly reflect God’s love in a mighty, mighty way.