You want to know what happens in the rural parts of town on a Saturday night? I mean, I can’t speak for what the younger kids are doing but I can assure you that Talladega Nights may or may not be on and that animal activity outside can have four people gathered at a window quicker than you can say two-track.

But this was no ordinary gathering. See, my dad has been spying on a small gaggle of geese in the backyard for a couple weeks now. There are babies (goslings, of course) and a couple of uber-protective (going forward from here known as helicopter) parents.

Tonight, my mom poked her head up and noticed there were a couple young deer that thought it might be fun to play a rousing game of duck, duck, goose and well, the geese were not having it. We quickly hustled over so we could watch the – more educational – show.

Sure enough, the deer were attempting to ‘poke the bear’ so to speak and one of the helicopter parents (and I could literally hear him saying it), was like, ‘come at me, bruh. i dare you. these are my babies and i will literally peck your face off to protect them.’

The deer ran off.

I decided to grab my camera and sneak outside lest I become a target for the pecking. Of course, as soon as I opened the door i noticed a beady eye (because they can’t stare at you head-on, I don’t think) staring back at me. I got as close as I felt was safe and snapped a few photos … 1) because the babies are ridiculous cute and 2) because I immediately thought about what I would do if I felt one of my own was in harm’s way. 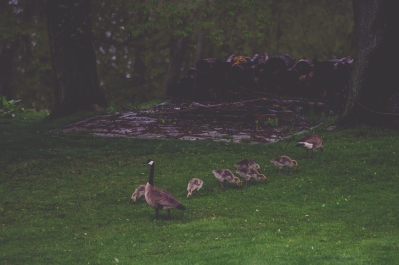 Tomorrow is Mother’s Day and one of the things I’ve learned about myself since becoming a mom is that I have an incredibly protective side when it comes to my little goose. I think most of us do.

I sense it at soccer games when some other player busts out a slide tackle or when CJ slides out of bounds on the basketball court and doesn’t get up right away. Or when I find him using Google Chat to video message his friends on his school-issued computer and tell him that he’d better not ever ever do that again because, no. Or when we’re simply walking down the street and I’m nervous a car might not stop so I grab him to be sure he’s paying attention.

I have an innate sense to protect him. I just didn’t know it was as strong until I became a mom. And it’s strongest, of course, when I feel he’s in some kind of danger; when he would need me to stand between him and whatever ‘the thing’ is.

But there are also moments where I have to allow because otherwise, how will he learn? I have to let him fail. I literally cannot be there all the time to helicopter him like that goose was doing. And I would drive myself crazy trying to work through every scenario of every worst case event that could occur. I have enough anxiety already; I don’t need that. And maybe some would say that makes me a questionable mom because I am okay with letting him fail. But I’m here to tell you the times I’ve grown the most were as a result of failure. And I believe the same will hold true for Connor.

I think about how our God is. I think about how much He’s protected me and kept me safe. But I also think about how He could keep me, His daughter, from all of the hurt and failure if He wanted to. But He doesn’t. He allows, to some degree, for us to experience some really, really difficult things.

I hate that for Connor. I really do. But part of my job as his mama is to train him up to be a man; commit to the Lord, to go out on his own, to love and cherish a woman, to raise ridiculously awesome kids, to take responsibility for that family and just generally to show the heck up in life. And I have no doubt he will.

Those goslings will grow and their helicopters will let them waddle off and do the same. The urge to protect doesn’t change, but the desire to have them fly is just as present.

Happy Mother’s Day to all of you mama bears; for whomever you call yours whether you birthed them, adopted them, never had the opportunity to meet them, blended into a family with them, befriended them, mentored them or just loved them so much there was no other appropriate name for you. And yes, for those of you with dogs, too. But not cats. You’re either a doggie parent or a cat lady. You have to choose.