Yesterday included, as per usual, 24 hours. I just broke it down and that’s 1,440 minutes. Whoa. Side note: When someone says, ‘just take each minute … one at a time,’ I’m going to politely ask them to shut up because there are far too many in a day to think anything crazy like that. The nice thing about yesterday though, is that I wasn’t rushed for any but about 45 of those minutes (as I was racing around trying to get to church on time for band practice). That leaves 1,395 (yay, math!) minutes to enjoy on a given Sunday. But, just like any other day, it’s not about the minutes. It’s about the moments. See what I did there?

There were several moments yesterday that caused me to pause and think. Some of them were tougher than others, admittedly. Church was hard. I might not ever go on Father’s Day again. I’m kidding; I probably will, but there were parts that made me sad. I thought of families missing their father. I thought of my dad missing his dad, my grandpa. And I also thought of my son and his dad. I was glad they were together, but that doesn’t mean that it made the day … ‘easier.’ After church was over, I talked to someone who made me feel so much better. She and I had both struggled with the service and had I not felt a nudge to tell her about something else, that really great moment may not have happened. And in the parking lot? This. Dads and their babes.

I spent a couple hours wandering an antique mall in Saugatuck with my own dad. He is such a kid in those stores and I think he secretly loves that I love wandering through them, too. It’s more fun for me, I think, to watch him look for old toys and see things that spawn memories from his youth. I don’t think my mom loves it as much but she plays along. And then, of course, we went and got a real cup of joe from this amazing little coffee shop downtown (Uncommon Grounds, people. Hurry, hurry, don’t delay!).

When we got back to their house, I snuck over the river and through the woods (actually, just through the house and down the deck stairs) to see this little guy. Everyone else had seen him the night before but he had run off not long after they snagged some photos. I was so excited just to get so close to this little babe. I love babies. They’re everywhere right now and it makes me want one. Oops, tangent. Well, most of the new babies in my life won’t run away like this little guy did, but still. I was within roughly ten(ish) feet of him and he just looked over like, ‘hey, you stay where you are and we’re good.’ 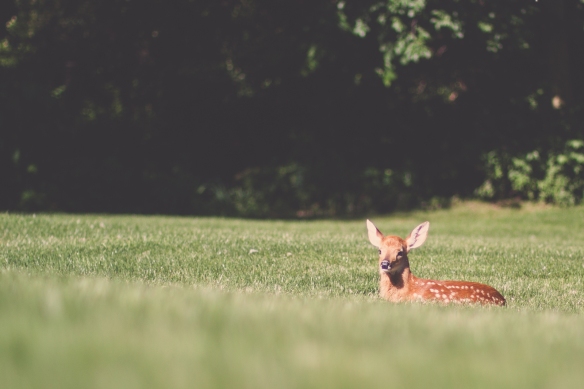 After my outdoor adventures, I enjoyed a great dinner with great company. When it came time to leave, the sun was starting to make its descent. Just like the day, it was lovely. It lit this barn in such a way that I spun the car around just so I could capture it. I’m crazy like that.

I could see the sun dipping down and I don’t have a great view by my place so I turned down a side road and my phone rang. It was Connor. His cute seven-year-old voice was exactly what I hoped to hear at the end of a special Sunday. And then this … this didn’t hurt one bit either.

1 thought on “a special sunday”