You know how many (likely more seasoned and life-put-together type) travelers plan out their summer adventures well in advance of the season because well, #puremichigan? Heck, I’ve even heard of families logging on to state park websites around January 1ish to book their sites for the much-anticipated best this state has to offer. Well, what I’ve come to learn and accept is that’s just not me.

Our second special summer weekend didn’t occur until the very end. I found an opportunity to get a couple extra days out of Labor Day weekend and about a week or so prior, started combing airbnb and homeaway and finally craigslist to see if there were any rentals available mid-state. Oh, we could have gone camping again but as you already may have gathered, I hadn’t even checked and by the time I did, there were red dots on every state park map I encountered. I just feel like red is the color of yelling, ‘you’re terrible for waiting! kthbye!’ It’s depressing.

Anyway, I kind of stumbled upon a wooden cottage up near Luther as I was perusing the craigslist. No, I didn’t know where Luther was but the whole scene sounded dreamy (and not scammy like some ads can). The cottage sat on 11 acres in the midst of just about nowhere right on the Little Manistee River and hidden from plain view of basically everyone. It’s so ridiculously out of character for me and sounded absolutely perfect!

I got in touch with the homeowner and she was so sweet and flexible with my waffling on dates so I decided to book. The best part of the deal was that the family lives only 40 minutes away from us so we headed over to get the key the night before we were to leave so we had more flexibility in our arrival and they were kind enough to offer that we could stay Sunday as long as we wanted given they didn’t have another renter coming Monday. They were also kind enough to let us take a peek inside their beautiful log home on Long Lake and it wasn’t long before I knew this little nook up north would be everything I hoped it would be.

After a quick doctor’s appointment that Thursday morning, Connor and I packed up our gear and headed north. We took the scenic route because we do that. And CJ actually doesn’t hate it. #faceinipad I’ve grown to love the opportunity to just slow down and take the back roads. To me, the highway is boring. I mean, sure when you hit the sign that says ‘Speed Limit 75’ there is a quick happy dance but there just isn’t as much to see (besides all of those dang campers that apparently were way ahead of me). I do have to say how grateful I am for Maps, though. I had no idea just how remote we were until we arrived at the very end of a dead end road off of several what I thought were dirt paths. As we pulled in, our smiles broadened pulling up to our home for the next few days. When you come upon something you’ve seen in photos and it’s better? All the happy.

That night was unpacking and grocery shopping and facial hair burning and fishing. Oh, don’t worry … it was my face that was too close to the grill when it blew up. Let’s just say I stopped smelling it sometime Saturday and the hair is now back. YOLO! Oh, we also attempted a bike ride that evening and I mentioned sand right? Well, apparently that’s what the roads there are made of and Connor, luckily, has a pretty sweet mountain bike with tires that aren’t even mad about it. My bike, however, well, let’s just say it was a killer workout.

I knew Friday would be the crazy day so we took our time in the morning, ran into Luther proper to grab some bait (CJ oopsed and put his in the freezer the night prior. He would attempt a thaw but then a chunk of ice bait landed in the river. I mean, really, this is when I have no doubt he’s at least half my child) and headed out just after noon for a couple hour kayak trip. We’d found a spot about twenty minutes away on the Pine River. Apparently, the Pine River is quite fast and there was talk of rapids and a brief training about how to avoid flipping over. Have I mentioned I haven’t ever been in a kayak? I was jacked. Get me out there! But we both decided that we’d go a bit further up river to avoid the real crazy stuff. I’d debated bringing my camera but thought better of it after all of that talk of being upside down in a not-so-lazy river. 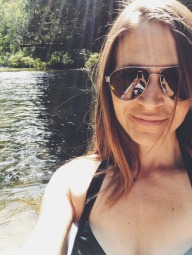 this was a rare moment of complete peace for me. i would normally be panicked to post something like this but i was so grateful. so, so grateful.

It was honestly amazing. The river definitely was fast and I definitely hit every rock because my kayak was doing everything it could to mess with me. But, I stayed upright and that was basically a victory. Even taking quick photos with my phone was a challenge, but I was just so thankful for the time with my boy. He was straight-up exhausted when we finished in just about 2.25 hours.

We headed back ‘home’ and got cleaned up to go out on our night date. I heard Traverse City was just about an hour away and gosh dang I love me some Traverse City. So, off we went. We wandered and shopped and ate our faces off in Cherry Republic (yay for samples!) and headed to the marina to see the last bit of the sunset. We didn’t leave until 9 or so which made for a lonnnnnnnng trip back (and a tired mama). But seriously, what a great day with my favorite 11-year-old.

Saturday was all about family. Before we’d headed north, I knew it would be a challenge for us to all get together to celebrate Alyssa’s 21st so I thought what better way to enjoy the day than to have everyone come to our little heavenly retreat. I’d posted a bit about it before, but I can’t even describe how thankful my heart felt to have everyone together loving on one of my very favorite girls in the whole wide world. 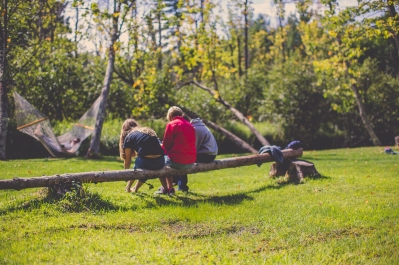 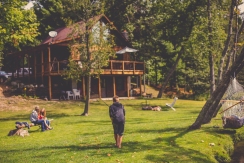 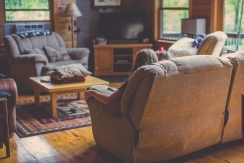 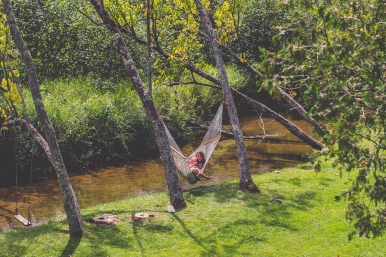 Everyone left that afternoon and Mike and the kids stayed to hang out. Aside from the special time I’d had with my boy, the highlight was likely when Teagan (after putting up a healthy fight) got the hang of riding her bike. It was one of those moments that I’ll cherish forever and ever because we practiced for a good 40 minutes or so. It was hot. I was sweaty. My back was about to give out. But that moment … that moment when she figured out she was doing it? It was everything. And when she rode to her dad? Well, my heart exploded. (and I sounded like a complete doofus, sorry about it)

We planned a quick fire that night to make sure we could do s’mores because camping! But, it started to rain. And it rained hard for a bit. I was already determined, though. A fire was happening and I obviously need practice in the fire safety arena.

The paper and the wood was damp so I won’t even lie. I prayed that by the time I got to the last sheet of a recent client RFP that it would start because otherwise, I’d have to ask Mike for his help and I’m far too proud for that. And by golly, wouldn’t you know that the Lord let me get to that last sheet. Thanks for the laugh, Chief. It made for a later night for the kids but that’s what summer vacation’s all about. Well, that and a cheap way to get rid of the hair in your nose.

I ended that evening next to the man that makes my heart skip a beat in front of a warm fire in the cool night air under a blanket of stars. Literally nothing could have been perfecter.

Like I’d mentioned, we didn’t need to be in a rush Sunday so we had a nice breakfast, packed up our gear and I realized I’d barely taken any photos so I did a quick tour around the property to make sure I would never forget the peace of this place. I mean, I wouldn’t anyway but photos are my jam.

When we left, we decided to take the kids fishing at a nearby lake for a bit and ended our time with a stop at the Dublin General Store and sampled (and bought) some delicious jerky. You don’t even belong up there if you won’t sample the jerky.

Here’s the thing. My summer trips were brief. We didn’t go all that far and we never even found our way to the ‘big lake’. But, it was exactly what I needed when I needed it and I couldn’t have been more thankful. The good news is, you’ll likely hear about some fall adventures because I have a lovely bank of PTO built up and just under three months to use it. Sorry in advance, boss!